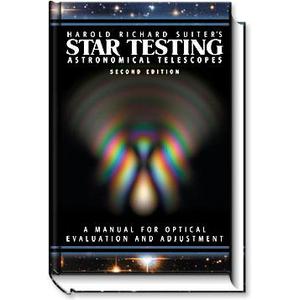 Many observers harbor misgivings about their telescope. The manufacturer may have guaranteed accuracy to “one-quarter wavelength” or as “diffraction-limited” but most telescope users have, at best, only a hazy idea of how to personally verifying such claims. Sure, there are ways to check the accuracy of individual components but for many they are hard to understand or require costly reference optics and other test equipment. Besides, telescope users are interested in the performance of the entire optical train, not just the main optical element.

What is really needed is a test that can be used at the observing site, so that all the problems that impact on a telescope's performance can be diagnosed. Isn't there a simpler and more complete way than the complicated shop tests? Yes, the star test is such a method. It uses the entire working telescope. It is not a poor substitute or a work-around that uses bits and pieces of the optical system. It is the oldest and most sensitive of the optical tests—an inspection of the diffraction image itself.

Star-test results apply to the complete imaging performance of the telescope. The star test is lightning-fast and requires only a good high-power eyepiece. It tests the telescope for precisely what it was meant to do. Bad or poorly-aligned instruments fail the star test unambiguously. The star test often allows you to correct the optical difficulty immediately in the field, when you might be frantic to have your telescope perform well to observe a once in a lifetime event.

While the star test has been around for centuries learning it has often been hampered by messy mathematics and its visual nature. Most people who use it have learned it at the elbow of a patient Master. In this book, Dick Suiter becomes your Master. He carefully shields you from difficult diffraction theory and uses advanced computer generated graphics to show you the appearance of each aberration. Again and again, you will look at Dick's graphics and say “I've seen that before. So that's what it was!” The star test is a powerful but inexpensive way of obtaining better resolution and contrast. With this book most observers will find that they don't need a new telescope because they now can test, diagnose and fix the one they have. Using Star Testing Astronomical Telescopes as a guide, your telescope will perform to the best of it's abilities and perhaps it will show images better than you would have believed possible.