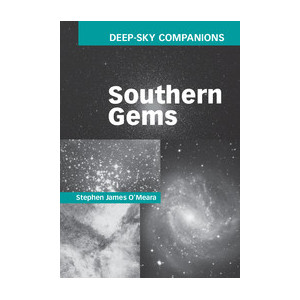 In Southern Gems, Stephen James O'Meara makes a detour beneath the southern skies, presenting a fresh list of 120 deep-sky objects for southern hemisphere stargazers to observe. Showcasing many exceptional objects catalogued by the pioneering observer James Dunlop, known as the 'Messier of the southern skies', all are visible through small- to moderate-sized telescopes or binoculars under dark skies.

The list features some of the blackest dark nebulae, icy blue planetary nebulae and magnificent galaxies of all types. Each object is accompanied by beautiful photographs and sketches, original finder charts, visual histories and up-to-date astrophysical background information.

Whether you live in the southern hemisphere or are just visiting, this new Deep-Sky Companion will make a perfect observing partner, whatever your background. There is no other southern sky guide like it on the market.

The author Stephen James O'Meara spent much of his early career on the editorial staff of Sky and Telescope before joining Astronomy magazine as its Secret Sky columnist and a contributing editor. An award-winning visual observer, he was the first person to sight Halley's Comet on its return in 1985 and the first to determine visually the rotation period of Uranus.