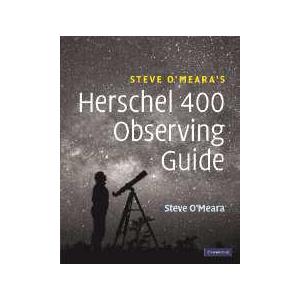 The Herschel 400 is a list of 400 galaxies nebulae, and star clusters, picked from over 2.500 deep-sky objects discovered and cataloged by the great eighteenth-century astronomer Sir William Herschel and his sister Caroline. It Comprises 231 galaxies, 107 open clusters, globular clusters 33, 20 planetary nebulae, 2 halves of a single planetary nebula nebulae, bright and 7. In this guide Steve O'Meara takes the observer through the list, season by season, month by month, night by night, object by object. He works through the objects in a carefully planned and methodical way, taking in some of the most dramatic non-Messier galaxies, nebulae, and star clusters in the night sky. Ideal for astronomers who have tackled the Messier objects, this richly illustrated guide will help the amateur astronomer hone their observing skills.

• Written by the world's foremost visual observer
• The first detailed guide on the Herschel 400 objects
• Takes the observer through the list, star by star, in a swift and efficient manner
• Designed to act as a guide for a long-term observational project for astronomers of all levels

'O'Meara takes a list of admittedly faint objects and injects new life into them. Right or wrong, many amateur astronomers will not consider you a top-level observer until you've completed the Herschel 400th Do not do it for them, however. Pick up this book, up your telescope, and set do it for yourself. It's a lot of fun. ' Michael Bakich, Astronomy.com

'If you want to see more obscure than those objects in the Messier catalog, try the Herschel 400th So ... The book is well thought out because it looks at the objects on a seasonal and monthly basis. Each month is then subdivide into seven observing nights, ideally near new Moon, that should allow enough time to view all the objects for that month. This book ... is a great way of pushing beyond the popular Messier catalog to broaden your viewing horizons. ' BBC Sky at Night Magazine

'O'Meara is well known for his columns in both Sky & Telescope and Astronomy magazines as well as his three previous books on deep-sky observing. The Herschel guide is a bit different from his previous ones as, due to the larger number of objects presented, there are only short descriptions of each one along with an image from the DSS. The book starts with a short introduction to deep-sky observing and then the meat of the book is divided into ... sections that cover when to observe objects by season. ... It is a far better guide to the Herschel objects that the one available from the AL. It is well presented ... to be recommended to observers looking for an organized project with medium-sized telescopes after completing the Messier list. ' The Observatory

'O'Meara ... a world-renowned visual observer, has now produced a comprehensive guide to the Herschel 400, using notes from his own observations ... The most useful parts of the book are the meticulously detailed instructions for star hopping to each object, starting familiar with a naked-eye and then start homing in on the target step by step using readily identifiable star patterns. These instructions are obviously the work of someone who knows and loves the sky. The Herschel 400 Observing Guide ... is a very good book, Whose strength is its main instructions for locating objects. Even if you are not interested in seeing all of the Herschel 400 objects, I recommend it as a good mid-range guide to the deep sky. ' Journal of the British Astronomical Association