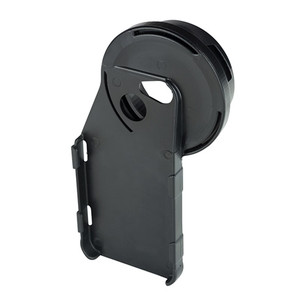 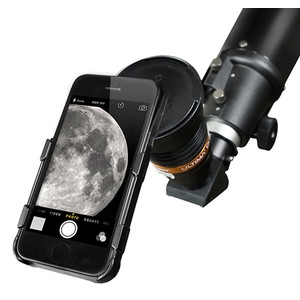 The Celestron Smartphone Adapter works with any telescope compatible with Ultima Duo eyepieces. It’s perfect for capturing the craters on the Moon, sunspots and solar prominences (for solar telescopes or telescopes with a solar filter), the planets, and even the brightest deep sky objects such as the Orion Nebula. You can also use the adapter for daytime imaging through your telescope.

Once you've captured the perfect shot, share it with friends—you can use all the functions of your phone without removing it from the case. You can even use your camera for traditional photography while it’s still in the adapter; just remove the ring and you’re ready to take wide views with your phone.

Just slightly larger than your smartphone itself, this adapter won’t add weight or bulk to your gear. Just slip the adapter on your Smartphone before your observing session, and you’ll be ready to capture an image at a moment’s notice! Take the Celestron Smartphone Adapter on your next adventure and come back with vivid photos and video of your discoveries!

Quick and Simple to Use

Place your phone in the case and attach the adapter ring. Slide the adapter over the eyepiece. Launch your camera app and begin capturing photos and video!