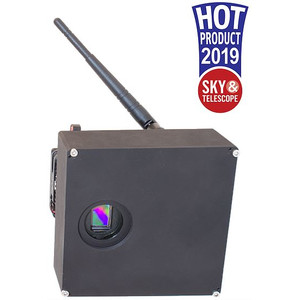 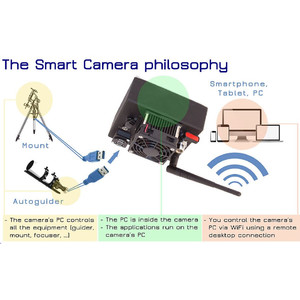 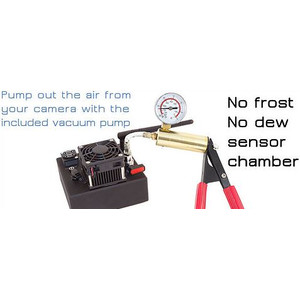 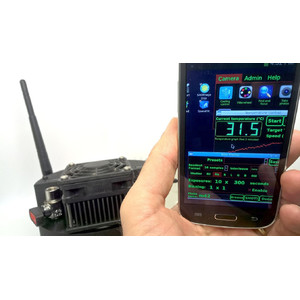 Smartcamera Approach: ​The Astrel Instruments cameras are powered by a 1000MHz Processor with 1Gb of memory and up to 64Gb of onboard storage. ﻿Thanks to its "intelligence", the camera can do onboard all the operations that other cameras can only do by means of an external PC, because the camera is a PC itself. Similar to a powerful astrophotography-oriented DSRL, the camera itself offers an integrated complete suite of easy to use graphical applications including:

The camera can autonomously autoguide with many commercial USB autoguider cameras and use planetarium applications to control the mount operations (alignment, goto, ...) on most commercial mounts. Many other commercial devices like motorized focusers, external filter wheels, can also be directly connected and managed autonomously by the camera.

The Wireless mode let the user communicate with the camera through a WiFi connection established between his Tablet / Smartphone (or of course a PC) and the camera. The connection uses remote desktop technology to send the camera display to the connected devices. No wires are needed between the camera and the devices: no risk of stumbling on a wire ruining the work of hours or even damaging your equipment.

As the PC is not needed and the camera only needs a maximum of 2.4A at 12V, in these modes there's no need to carry big battery packs and power inverters: one small battery or even your car's one is enough for a whole night.

All the connected devices use the same integrated software suite: the camera's applications are accessible via remote desktop from any network connected device, including PC, Smartphones and Tablets.

​Moreover, thanks to the Open Source license of all the software and the Linux OS, other applications can be easily added by the users, giving the camera more and more capabilities: our aim is to create a community of users and software developers which will add leading edge contents, ranging from innovative readout modes to web enabled applications.

Thanks to the powerful integrated microprocessor and large memory, any Astrel Instruments camera is by any means a PC, running the Ubuntu OS with hundreds of available applications, including many astrophotography related ones. The cameras come with several pre-installed astronomy applications including:

Cooling and vacuum chamber: The AST8300X camera features a power consumption of only 2.4A @ 12V in fully operative state with 100% peltier on. In spite of this very low power consumption, an efficient 2 stages peltier cooling system can lower the regulated CCD temperature by up to 35°C below ambient.

​The sensor and the cooling chain are contained in a vacuum proof chamber: using the included vacuum pump connected to the valve on the rear of the camera body, in less than a minute the air can be pumped-out. This has 2 fundamental effects: it eliminates the possibility of frost forming inside the chamber.

​Every camera is tested to maintain a proper vacuum level for at least 3 days (most cameras can hold the vacuum for several weeks). For customers running remote observatories, it is possible to fill the chamber with inert gas like Argon or Krypton, which will stay in the camera for months. The vacuum level can be controlled through the manometer incorporated in the vacuum pump. No desiccant is needed.

The base package includes: