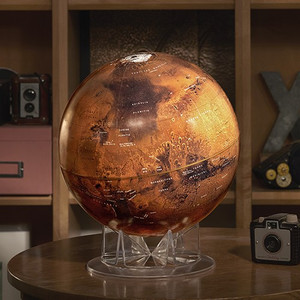 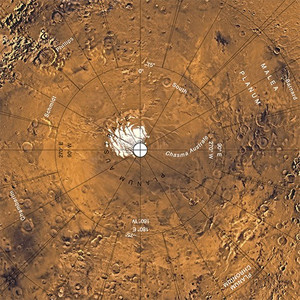 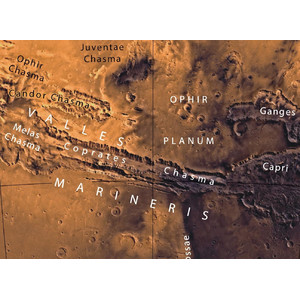 Created with more than 6,000 images taken by the Viking orbiters, this globe approximates the planet's true color. Produced in cooperation with NASA and the U.S. Geological Survey, the globe includes official names for 140 features.

This new edition comes with an updated 16-page booklet about the surface of Mars, authored by Dr. Michael Carr of the U.S. Geological Survey, who is a leading expert on Martian geology and history. Carr describes the latest evidence of past water on Mars discovered by NASA rovers - findings that boost prospects that the Red Planet could once have been an abode for life. The updated booklet also discusses the latest findings from NASA's Mars Odyssey and Mars Reconnaissance Orbiter, and the European Space Agency's Mars Express orbiter. These spacecraft are revealing new details about the composition and structure of Mars's surface, helping scientists unravel the mystery of how and when Mars evolved from a warm-and-wet world that might have supported life to the planet-wide desert that we see today.

For centuries telescopic observers have strained to see faint and fleeting details on the surface of the Red Planet. Which were real — and which imagined? This Mars globe portrays the rich assortment of those enigmatic features — and showcases the intriguing features discovered by NASA spacecraft. Today we know the bright areas on Mars are covered with fine, light-colored sand that gets blown around the planet by winds in its thin atmosphere. The dark areas, however, are not huge expanses of vegetation, as once thought, but instead vast volcanic deposits dating from the planet’s early history.