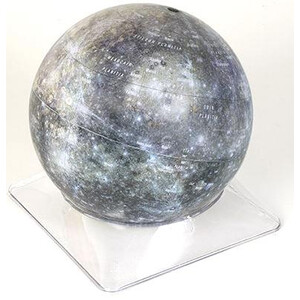 For centuries, telescopic observers struggled to identify even basic surface features on Mercury, the closest planet to our Sun. Not until NASA's Messenger Spacecraft began orbiting the planet in 2011 did we get close-up views of Mercury's entire surface.

Now that global perspective is available in a fully detailed globe that's perfect for your desk or bookshelf.

To create this portrayal, editors at Sky & Telescope worked with Messenger scientists to produce a custom base map. The result merges 16,000 monochrome images with 2,000 frames taken through color filters. Bright splashes mark relatively recent craters on the surface.

Special processing has preserved the planet's natural light and dark shading, while allowing labels to stand out clearly. The official, IAU-approved names of nearly 200 craters and other geologic features are shown.

The globe comes with a freestanding, clear plastic base and an information card describing key Mercury facts and how the globe was made.

Mercury's overall density is so high that it must contain a lot of iron. In fact, the "Iron Planet" is believed to have metallic core that takes up three-fourths of the planet's diameter and half of its volume. How Mercury ended up with so much iron is still a mystery.