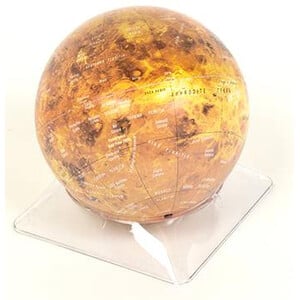 Sky & Telescope's updated model of Venus relied on a mosaic of images from the Magellan mission to Venus (1990-1994). Magellan mapped more than 98% of Venus at a resolution of about 100 meters (330 feet); the effective resolution of this globe is 5 kilometers. Other data used for the globe came from the Pioneer Venus mission, the Soviet Venera 15 and 16 spacecraft, and radar images from Arecibo Observatory. Altogether this globe, which comes with a 16-page booklet, offers a beneath-the-clouds glimpse of our sister planet in unprecedented detail. Sky & Telescope produced the globe in collaboration with NASA and the U.S. Geological Survey.

Venus is the planet in our solar system most like Earth in size and mass. Yet it’s a very different place, with a runaway greenhouse effect that creates surface temperatures exceeding 850°F (450°C) — hot enough to melt lead! The Venus globe is particularly intriguing because we can actually see the surface without the planet’s dense, opaque cloud cover getting in the way, thanks to global radar mapping conducted by orbiting Soviet spacecraft. The surface of S&T’s globe is color-coded with blues, greens, and browns, and much topographical diversity. Altogether it looks like another Earth, though obviously it’s utterly different. But that won’t stop you exploring the landscape virtually.

Venus is an intensely volcanic planet whose geology has been shaped by vast eruptions throughout its history. Lava plains cover 85% of its surface, and geologists have mapped more than 1,000 volcanic features — some of which might be actively erupting today.